Third edition for me at  Göteborgsvarvet and persoalbest again with 14 min, 21km at 1.39 and I can only sum up with incredibly pleased! 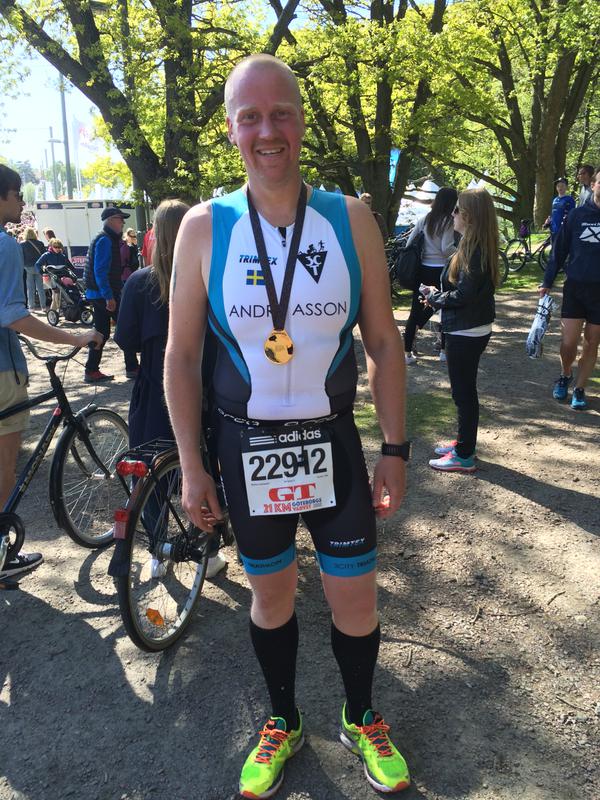 The weekend before midsummer I did 3CT’s Midsummer sprint again. This time in the competition class and so on afterwards I do not remember so much of this competition except I was very pleased to have ran 5 km in about 21 min in a triathlon competition. 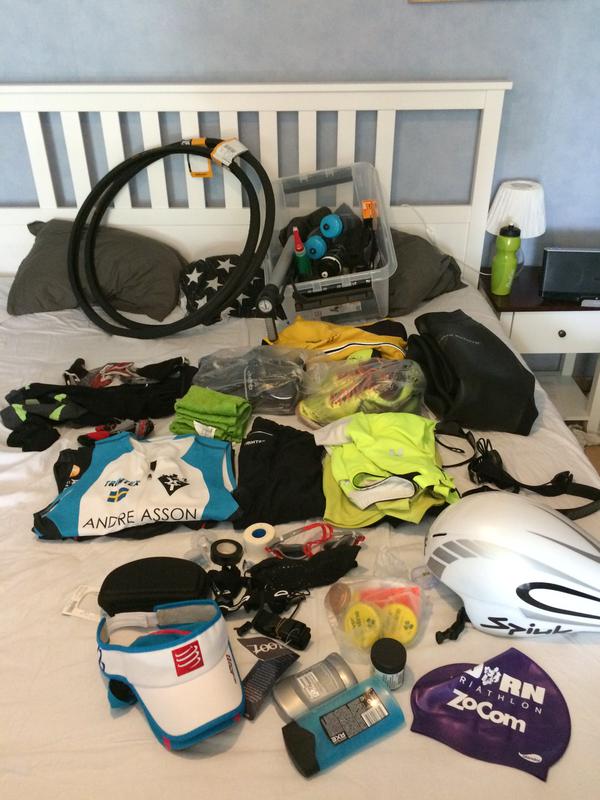 Then Ironman came Aug 15, 2015. This is how the packing looked like and the only thing missing from the picture is the bike.

And to the right you will see the 2015 Ironman camp. A little nervous, so everyone in the family was in place all 6 days before the race. 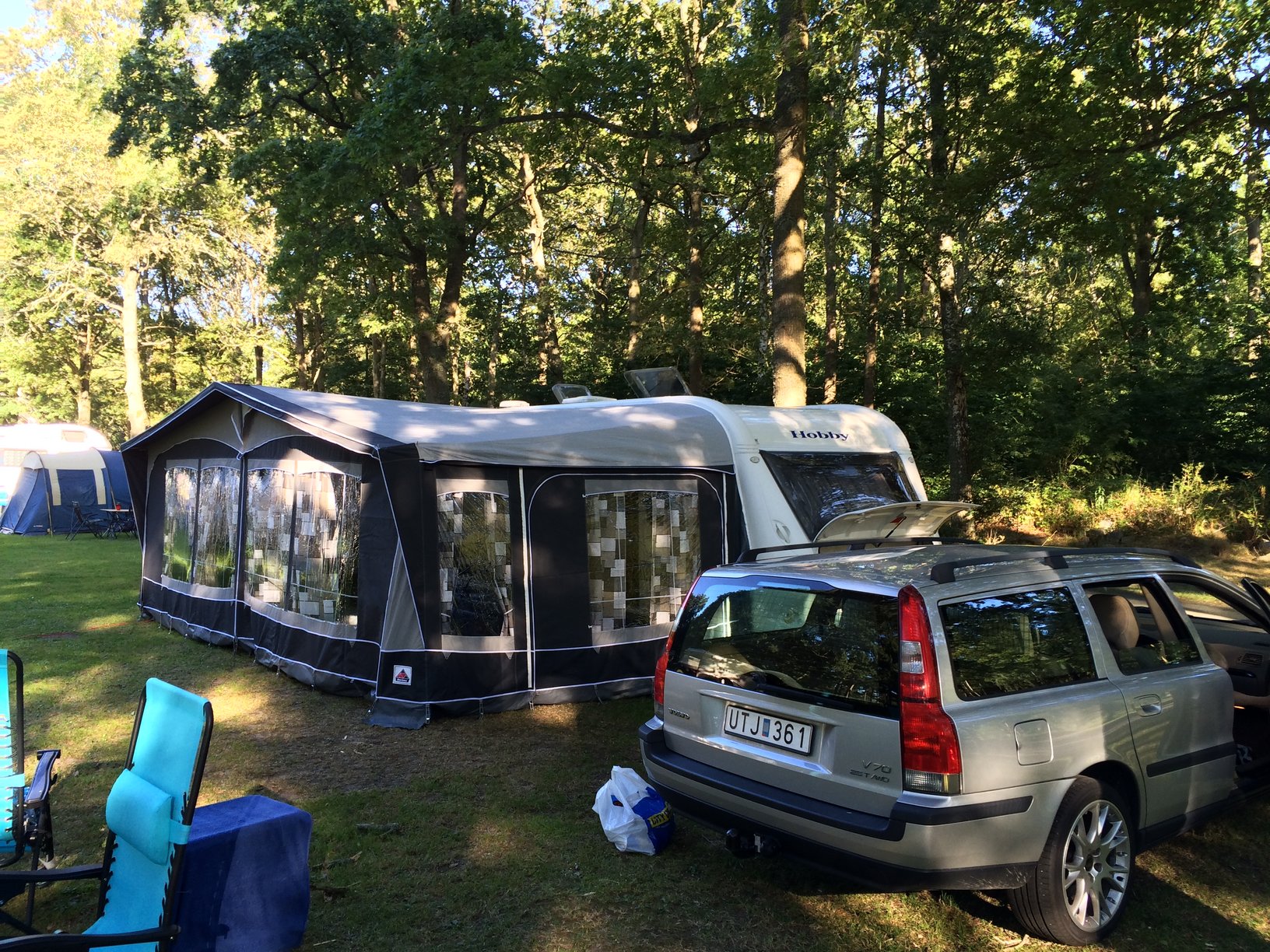 A short report from Ironman 2015. Then came the day that I had been waiting for since 2012, the goal of my entire trip, all the swims, all the biketrips and all the running steps was for this day! A huge pressure on myself and it was this day it would happen!

To stand at the start and not knowing if you would at all survive?

I wanted to cry, vomit, go home, and just go to bed. I felt terribly bad. Had I been able to get everything wrong? I did the whole yourney without any hesitation. A huge uncertainty and I guess when talking about being outside the comfort zone, this is what you’re talking about. Unfortunately, the time comes and the startup time comes whether you want it or not. When you get to the startline, it starts to stream music from the speakers. Kenta’s-  Today I am strong! Then you know that there is something you has to do today. And after Kenta, the National anthem comes when you’ve never been stronger.

Bang! The starting kanon goes of ..

When I got into the water, I had difficulty finding my flow and felt there was a lot of chaos with both the contestants and also that this year was a rather difficult swimming because of a lot of high waves. After about 1 km of swimming, I start to find my flow and can swim at some point when I suddenly see a man next to me, which I think is too close, two swimtakes and pang! A powerful kick straight over the arm, the pain was not so dangerous it felt the most unpleasant. In the next second I’m filled with an unhappy feeling. Where the hell are my watch? I stop swimming and feel on my arm, it’s gone! I’m dyving down, but watches the clock disappear in the depths. I lie and wonder for a while before I swim on and am both pissed and sad that I will not be able to keep track of either times or speeds. And not enough with that, after about 1km I hear how someone screams and I look up. I see that a man is in the water and struggles to stay fluent and understands that he has cramps. I then swim in behind him and hold his head above the water and call for the attention of the sea rescue. But they hard time to get us and time passes and just before the sea rescue arrives, the man turns around and disappears in the crowd without a word. The man from the sea rescue, of course, wondered what I’m doing and I explain what happened before I swam on both angry and sad. And now I’m lucky I’m far from land because otherwise I think ended the race. I swim at about 500m until the shift comes a stream of positive thoughts and I get up to the bike with a happy mood and even better when I see my supersupporters stand up and cheer.
The bike itself I do not have so much memories from, except that I was so pissed beacause the wind  (up to 15s / m), which was a major disadvantage of almost the whole course, except when I was going to cycle over the “Alvaret” on Öland. There was no hard bike ride and the life was wonderful at 10-15 s / m in my back. Unfortunately, I did not have a chance to check the speed but estimate that the speed was between 45-50km / h.
When I came in for transition 2, I remembered that I thought, “God would be nice, I’m gonna run a little ?
But already after about 7 km, I feel that this was not “nice” anymore, but I’m in and running is running. You run 3 laps which means that I can see my supersupporters 4 times during the final marathon run. I run and walk every second and now not just the body begins to protest but also the head, really. But if i had come this far, I never give up! After 30 km, my stomach also gives up and I spend about 20 minutes on the toilet. But when stabilized, I realize it’s only the riot left (12 km). When I´m close, I wil get to the red carpet and hear what I waited for 3 years.
-Mattias You are an Ironman