Göteborgsvarvet 2017 became more learning than racing, after just 2km I got cramp in both thighs that only lightened as I runed uphill ? and as we all know, it usually comes downhill after an uphill and then the cramp got back. But after about 5km I realize that today it is not racing, I’m just gonna try to enjoy the party.
Goal at 1:47 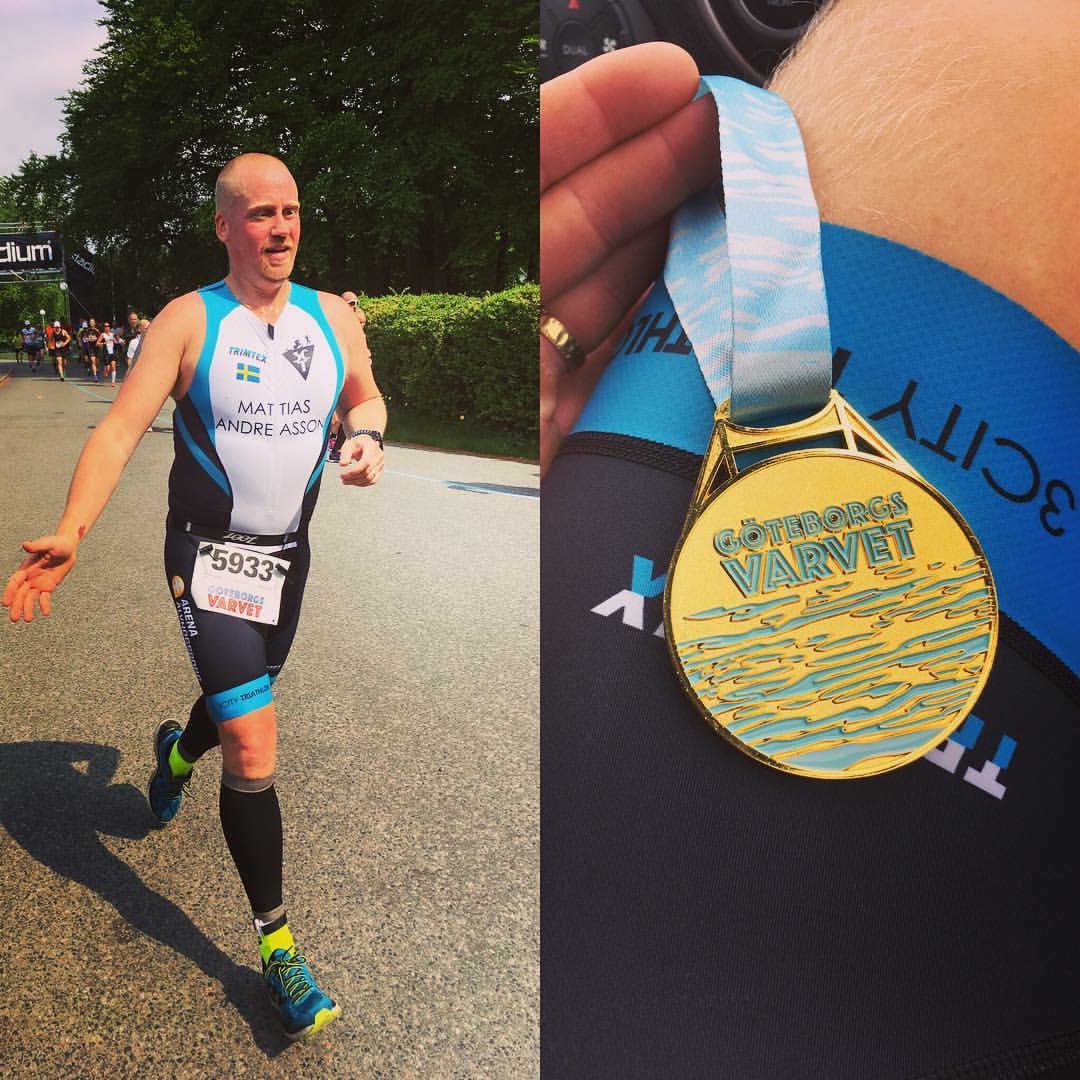 it’s an absolutely wonderful competition with a beautiful nature and urban environment.

This is a competition that I can warmly recommend! 2017 there were some lessons from the previous year. And with this I make new personal best at the distance at 5:11 and again I surprise myself because I do not think I’m at the level of my form.

With the picture from the finish line, I hope for the “greatest dad award” but it turned out to be more a “embarrassing husband award” I think they became a “picture of time”

Best of the Year!

This year I went to Kalmar with a ulterior motive. Since 2017 did not come with any bigger challenges I haven’t did not before, I thought it could be a preparation for what I was thinking would be the big goal in 2018. But nothing was decided about 2018, that decision I would take when I crossed the finish line at Ironman Kalmar in 2017. Little to test how the body really responds to the training.

The feeling of this competition is completely different from the other major competitions. There was neither stress nor nervousness. I had a few goals with the competition that I had prior to the race:

1. Be able to tell myself that I feel fresh after the race

3. And finally run the marathon in less than 4 hours

There was also one more but it was in my mind so obvious that it did not even end up on the list, and it was that I would do a better time than 2015.

The start goes of and I’m swimming at my edge not be in the worst mess, and it’s quite well. At one point the track narrows sharply and there I felt that I became very compressed and afraid, i lost some time. But by the way, I’m happy with the swimming that ended at 1:13.

Out on the bike and loaded with mom’s pancakes all over their face during the first few kilometers, and there were some huge laughs in the audience. The cycling rolled on well. But with the 2015 sense of sunshine and tailwind all over the “Alvaret”, I was quite disappointed when I got there this year and the wind blew elsewhere, about 10s / m straight in the face and it was really a dozen miles before I was back on the mainland. I cycle the last 60 km before switching and look forward to wearing my running shoes. Bikes at 5:48.

On the run, I’m out to speed up my 4-hour goal but feel pretty soon that if I’m going to keep this move I will not be “fresh” when I’m in goal and because the 4-hour goal was the lowest priority, I pulled down speed. But I ran the whole marathon that was my goal and it felt really good. I had a real “dipp” in the head between about 20-30 km during running but as said, it was only in the head and not in the body so just pulling the hat in front of the eyes and waging on. With about 10 km left, it’s easyer in my head and I’m happy again. I run across the red carpet and hear Mattias you are an Ironman! And it’s an absolutely wonderful feeling. Immediately after the finish line, my self-analysis begins with body and soul and after a shower, a beer and 2 burgers I see two guys standing and talk. One guy drops his finishing t-shirt on the ground but can not bend down to pick it up whereupon he looks at his mate who looks horrified. The mate says: Sorry, I can not help you, I really can’t. I smile and go with my beer and burgers and pick up the shirt, they look at me and find it unfair that I could move in that way and looked so fresh. There it was confirmed, both by others and by myself. Now I could honestly say I was in a goal and felt fresh. Therefore, I accepted my own challenge until 2018. A triple Ironman in Lensahn, Germany. 11.4km swim / 540km bike / 126.6km run

11:32 Became total time and I improved with 1 hour and 7 minutes